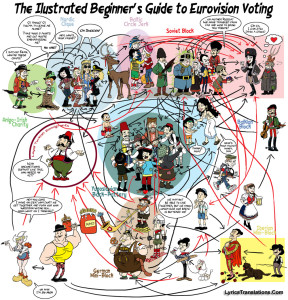 In recent years, the Eurovision winner has been decided by 100% televoting in all countries; before 1997, however, the decision was entirely in the hands of national juries.
The voting procedure until 1975 included a 10-member jury “one man/one vote” which was the norm from 1957-61; 1967-70, and once more in 1974. In 1962, the juries gave 1, 2 and 3 points to 3 songs of their choice; the following year 5 songs were awarded between 1 and 5 points; and from 1964-66, the juries had total of 9 votes and they could distribute them to 3 or two songs or give all 9 points to one song.
Between 1971 and 1973, two jurors from each country – one over 25; one under 25 -were sent to the contest venue to register their votes in vision, awarding between 1 and 5 points to each song, except of course for their own country’s entry. There was no “on air” voting in the first contest in 1956 – the winning song was simply decided by a panel of judges, but the actual results were not made public.

In 1997, Austria, Germany, Switzerland, Sweden and the United Kingdom gave members of their public the opportunity to vote for their favorite songs. Since the experiment showed to be a success, from 1998 all countries were encouraged to use televoting while back-up juries are still utilized by each country, in the event of the televoting failure.

Nowadays, voting is done via televoting or text messaging and anyone can vote as many times as he likes, the one restriction being that they can’t vote for their own country. The votes are tallied nationally, and representatives call in the results to the host country, allocating 12 points to their country’s top choice, 10 to second place, 8 to third, and so on down to 1 point for 10th.

Votes are read out in ascending order, culminating with the maximum 12 points. The scores are repeated by the Contest’s presenters in English and French, which has given rise to the famous “douze points” exclamation when the host repeats the top score in French.

Since 2006, point from 1 to 7 are flashed up onto the screen and the speakers from each country only announce points from 8 till 12, to save time.

To avoid countries changing their votes after seeing the trend on the scoreboard, the EBU scrutineer is notified in advance of the results of the last five countries in the running-order of voting.

Celine Dion – My Heart Will Go On