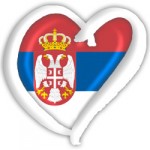 In 2007, Serbia participated in Eurovision for the first time as an independent country and won the first place with song Molitva performed by Marija Serifovic.

Since 1961. Serbia has participated as part of Yugoslavia and from 1992. as part of Serbia & Montenegro.

Marija Serifovic, with her song “Molitva” (click to see the lyrics) competed at 52. Eurovision Song Contest in Helsinki, Finland, along with representatives of 24 other countries and won 268 points. She performed as 17th in front of 15.000 people in Helsinki’s Hartwall arena and the show was covered by 2.000 reporters from all over the world. Apart from European countries, the program was shown in Australia, Egypt, Northern Korea, New Zealand, Canada, India, Jordan and USA making the audience comprise of 300 million people. The victory is the biggest success of Serbian music in the world and it has brought Eurovision Song Contest to it’s capital, Belgrade (Click to for more information about Eurovision Song Contest in Belgrade, 2008)

*The Republic of Serbia (Република Србија/ Republika Srbija), is located in Central and Southeastern Europe, covering the southern part of the Panonian Plain and the central part of the Balkan Peninsula. It borders Hungary on the north; Romania and Bulgaria on the east; Albania and Macedonia on the south; and Montenegro, Croatia and Bosnia and Herzegovina on the west. Its capital is Belgrade. The current borders of the country were established following the end of World War II, when Serbia became a federal unit within the Socialist Federal Republic of Yugoslavia. Serbia became an independent state again in 2006, after Montenegro left the union which was formed after the dissolution of Yugoslavia in 1990s. *Source: Serbia – Wikipedia

Click to see a short movie “Sights and Sounds of Serbia”

Celine Dion – My Heart Will Go On